Three times the power, but the same spirit of Bluebird - 9th December 2006

The 1967 footage of Donald Campbell's fatal attempt in Bluebird to claim the record has thrilled and appalled generations.  The now famous blurred pictures show the jet-powered boat blasting across Coniston Water to a movie-tone style commentator.  But as the speeding craft accelerates to 300mph it slowly arches into the air, gently flips and dives into the lake, spreading wreckage as it crashes back on to the water.

But the images have inspired one man who shares Campbell's need for speed - and now he plans to claim the record for himself and Britain in a 21st Century version of Bluebird which has all her spirit, but three times the horsepower. 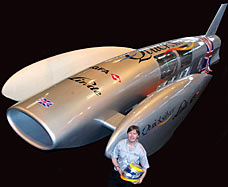 Nigel will sit in a tiny bubble in one of

Racing enthusiast Nigel Macknight, 51, even hopes to pilot his £4 million boat Quicksilver into the record books on the same stretch of water in the Lake District where Campbell lost his life. And he knows that, after sacrificing his career, his most precious possessions and a 20-year relationship with his girlfriend in pursuit of his dream, he too could end up dead. "Who said it had to be easy to set a world record?" he said. "You've got to be willing to risk yourself, but you've also got to think about the possibility of being killed."

Macknight hopes the Quicksilver project will catch the nation's imagination. "There's an enormous amount of goodwill associated with the project because people have such fond memories of Bluebird."  Only last week Campbell's daughter Gina launched a campaign to raise £750,000 to house a fully restored Bluebird at the Ruskin Museum in Coniston and she is backing the Quicksilver venture.

Macknight, a Formula 1 fan from boyhood, found his imagination was fired when, aged 17, he saw a documentary about Campbell. With a certain amount of youthful naivety, he decided he would get a new Bluebird project up and running.  He worked on it for 18 months but eventually gave up. In 1978 he enviously watched news reports of Australian Ken Warby setting a new world record of 317.60mph, which still stands.

Macknight became a successful writer of technical manuals about aeronautics and it wasn't until 1999 that he relaunched his project, quitting his job and remortgaging his house. "I realised that if I was going to ask everyone else to put things into this project then I had to give it my all," he said. "I sold everything I had."

His sale of memorabilia, including an archive of Campbell's photographs and a watch given to him by astronaut Buzz Aldrin - and containing metal from the original lunar module - raised £12,000. But one of his buyers was so impressed by Macknight's enthusiasm that he introduced him to a sponsor - who backed him to the tune of £100,000.

More than 40 firms are now involved in building Quicksilver, which looks very similar to Bluebird but is packed with safety devices to protect the pilot and ensure it does not flip over like its predecessor as it speeds across the water at 350mph.

Macknight will lie virtually flat, gripping a steering wheel and using one pedal to accelerate and another to brake. The cockpit on the prototype was situated inside the fuselage but for the record attempt it will be located in one of Quicksilver's stabilising floats, enabling the engine to be moved forward.

Quicksilver's Rolls-Royce Spey engine came from a Hawker Siddeley Buccaneer aircraft. It will generate 25,000 horsepower - "more than the full grid of Formula 1 cars at full throttle", says Macknight - and is fuelled by a 105-gallon tank. The Bluebird generated up to 10,000 horsepower.

Looking ahead to his record attempt in 2008, Macknight is putting the dangers to the back of his mind. "The world has changed a heck of a lot since Campbell was killed," he said. "Then death was all part of the game. "Now it's not acceptable to have a death-or-glory approach. It will always be dangerous but you can't make it a reckless, cavalier thing. "Safety is of course paramount."

Jet powered boat record breaking all but ceased as a result of the many deaths, with a new breed of racers working to build the performance of electric and now solar powered boats. In 1994 Norman Boddy set one of the first electric boat records of 55.91 mph in a 144 volt runabout.

SOLAR CIRCUMNAVIGATION SPEED RECORD - The above table illustrates one of the most likely ocean awareness expedition routes showing the time elapsed in days for 7 knots average cruising speed, including times for 5 and 6 knot averages - allowing for 10% downtime and 36 days in ports.

Unlike most water speed record attempts, this is more concerned with endurance over long distances with relatively slow velocities. Apart from nuclear power, the only way to power a vessel over 24,000 nautical miles and more is using renewable energy sources. Hence, although the objective is to reduce the current solar powered circumnavigation water speed record from 584 days and 3mph average, the event in not an outright non-stop yacht competition in the offshore racing sense. It remains to be seen how accurate such a prediction might be. 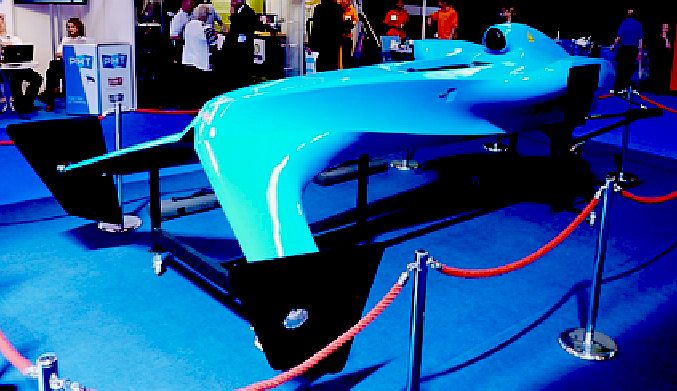 An idea for an electric WSR contender floated (or rather not floated) in 2011, and sunk soon after - for no discernible reason - other than the boat was billed to run at 70mph, which was already 28mph too slow to take anything other than a few niche records. A real shame because the craft is quite a looker.