Quicksilver is said to be the largest and heaviest boat ever to contest the World Water Speed Record, and by far the most powerful. The machine is also unique in WSR circles in being a “four pointer” – meaning that when it is planing, it will ride on four planing surfaces. All of the previous planing craft designed for contesting the World Water Speed Record were three-pointers.

The Quicksilver team believe that the four-point configuration will be inherently more stable than a  three-point design. Proving that theory can only be answered when Quicksilver takes to the water at speed as part of the research programme that underpins the project.

The Quicksilver project is managed by Nigel Macknight. The design was initially based on concepts for a rear-sponsoned configuration by Ken Norris, who had worked with the Campbells on their 'Bluebird' designs. As the project progressed it became clear that a different concept would be required. Ken Norris left the Quicksilver project and the design of the boat changed to the final front-sponsoned configuration in order to assure proper static and low-speed buoyancy and high-speed stability. Nigel Macknight has emphasised that though the design has changed significantly much of Ken Norris's design remains along with the inspiration that began the project. 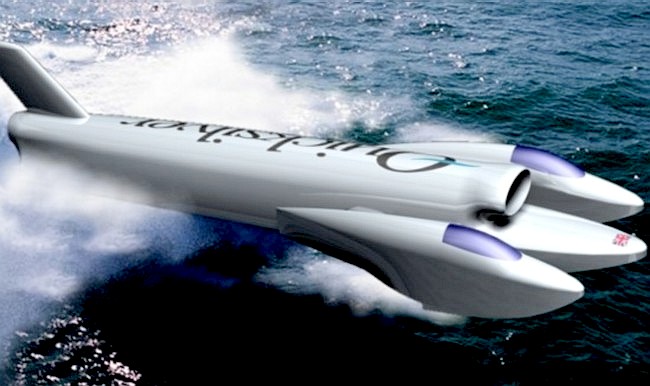 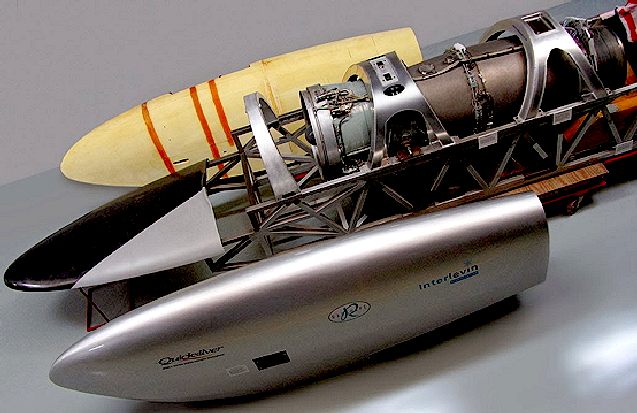 Quicksilver's design is of modular construction with the main body consisting of a front section with a steel spaceframe incorporating the engine, a Rolls-Royce Spey Mk.101, and the rear section a monocoque extending to the tail. The front sponsons are also modules, one of which contains the driver, an unbalanced arrangement that is hard to come to terms with.

Before his passing Ken Norris said to our IP consultant that for the K7 they adhered to the rule that there should be no aerodynamic aids. He went on to say that rules are meant to be broken and the system adapts. The distinct impression was that Ken wished he'd ignored that particular rule and we hope that Nigel's team follow their instincts where common sense dictates.

Current work includes sample testing of bonded structures to aid design of the horizontal struts that attach the sponsons to the main hull. This includes conducting test cycles with the samples fully submerged underwater.

The current plan is to fit the rear hull section (stern module) followed by both sponsons in preparation for the first trials on water. In this initial waterborne form, the craft will be known as Quicksilver Dash 1 and speeds will be limited to 200 mph. 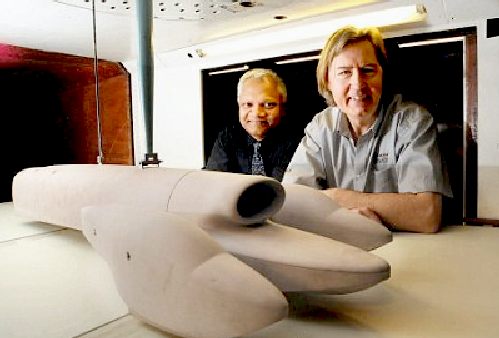 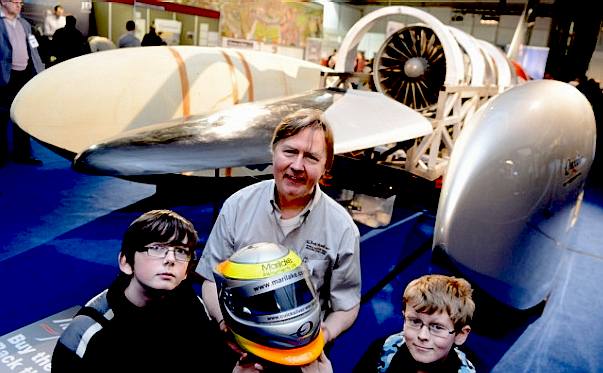 SALFORD UNIVERSITY - Salford's role is to test the design for pitch, yaw and roll - meaning that when Quicksilver approaches the record speed of 317mph, it won't veer off course or flip like Bluebird. Using the university's wind tunnel facilities, the team from the School of Computing, Science and Engineering is helping the British Quicksilver team test the aerodynamics of their craft. The current record was set in 1978 by Australian Ken Warby and Quicksilver are aiming to reach 330mph. But, as Salford project leader Dr Thurai Rahulan explained, there is more than just national pride at stake. He said: 'Our students are getting hands-on experience at the cutting-edge of aeronautical design by doing their own calculations on the project. 'We're also looking at how we can use our new understanding of forces and the technology to benefit ordinary passenger craft. 'The results can make ferries and other ships more efficient and able to achieve higher speeds using the same or less fuel.' 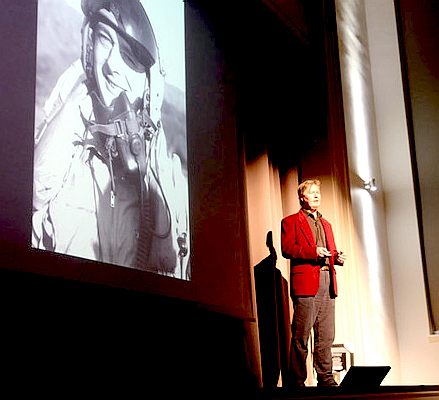 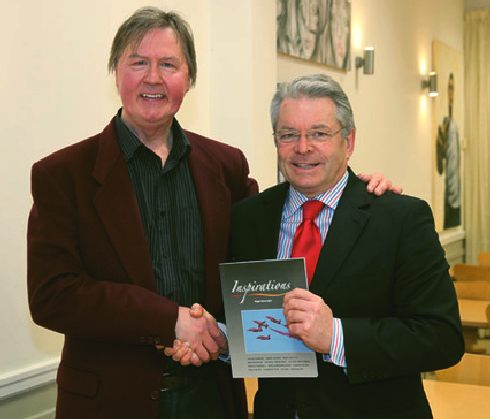 Quicksilver team leader Nigel McKnight, who will be driving the boat during the record attempt, said: 'This will be the culmination of 20 years of planning for me and so it is vital that the boat is made as safe as possible. 'Salford's work in aeronautical engineering has a fantastic reputation and we are extremely grateful for their help.' 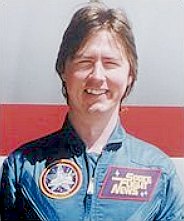 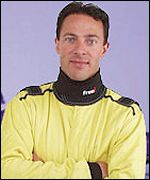 It's the most dangerous speed record in the world, and many of those who have tried to break it have died.  The quest to be the fastest human being on water has inspired generations of speed fanatics.

When Australian Ken Warby propelled his jet boat to a staggering 317.6 mph, back in 1978, many people thought the limit had been reached.  In 1967, Donald Campbell was killed trying to break the 300 mph barrier. His boat Bluebird took off, flipped over and disappeared. 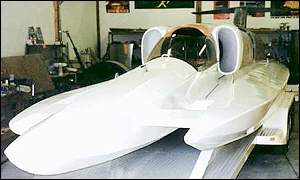 2001 finally saw the recovery of Bluebird, and the body of Campbell, from the depths of Coniston Water in the Lake District.   By coincidence, this renewed interest in one of Britain's greatest record breakers comes as three men are preparing to do battle over the water speed crown.

In the Australian corner is Ken Warby, still the fastest man on water, who has built a new boat to try to ensure he holds onto that 23-year-old record. But this time his son Dave may be the driver.

Their principal challenger is Nigel Macknight, who aims to bring the record back to Britain with his boat Quicksilver. Construction is underway, and his futuristic craft should be in the water next year.  But a third hat has now been thrown into the ring. American challenger Russ Wicks already holds the record for the fastest propeller-driven boat, with a speed of 205 mph.

Now he wants the big prize, and he has put together a consortium that includes aerospace and motor racing engineers. Their boat is still at the design stage. Nigel Macknight relishes the prospect of a three-way fight.

"The contest for the record was almost moribund, so it's wonderful it is all coming together in this way," he says.

"Competition can provide a tremendous spur. It will help us all to raise our game as we try to beat one another."

As the record holder, Warby is dismissive about his rivals, and says he will wait to see how they fare before he enters the fray.

"Nobody who is building a boat at the moment is going to break my record," he told News Online.

"I would like to see it happen, then I will let my son Dave take out the boat and push the record up to 400 mph."

And Warby believes that even higher speeds will be achieved in future.  "One day someone will go through the sound barrier on water," he predicts.  But although he says that driving his previous boat was "very easy", he is in no doubt about the risks involved in going for the record:

"It takes a lot of hard work and a lot of dedication, and you do not want to enter into it lightly. It is extremely dangerous."  The Australian, who now lives in America, built his new boat in his garage. He thinks that if someone does take his record, it will be a lot easier to get sponsorship from his home country, as national pride will be at stake.  "But at the moment, we're just sitting and waiting," he says.

You get the impression that he would relish a fight to retain his crown, and he has thrown down the gauntlet to his rivals.  "So far there is a lot of talk out there," he says.  "So let's see them put their throttle foot where their mouth is."

But Nigel Macknight won't be drawn into a war of words. His response: "The proof of the pudding is in the eating. We have got to be sporting to one another."    Since the 1920s, the world water speed record has been held by Britain, the United States and Australia. So it seems appropriate that the old rivals are once again preparing to take to the water.  The spirit of Donald Campbell and Bluebird is still alive. 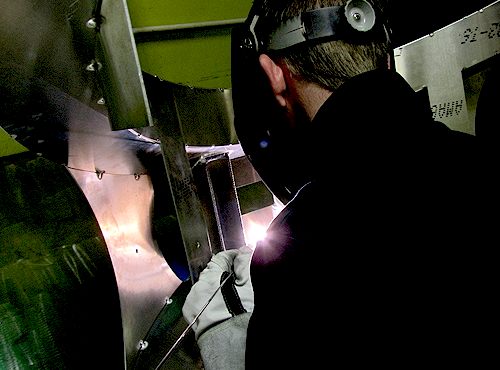 This website is Copyright © 2014 Bluebird Marine Systems Limited.   The names Bluebird™, Solar Navigator™,Blueplanet BE3, Ecostar DC50™ and the blue bird in flight logo are trademarks. All other trademarks are hereby acknowledged.