Donald Campbell inherited his father's taste for adventure, and went on to set water and land speed records in his Bluebird vehicles.  Donald's career spanned 18 years and finally end in tragedy on Lake Coniston, where he was trying to best his own record to drum up sponsor interest.  An auction of Donald's land speed record artifacts raised money to convert a minibus for a special needs school in Wiltshire. 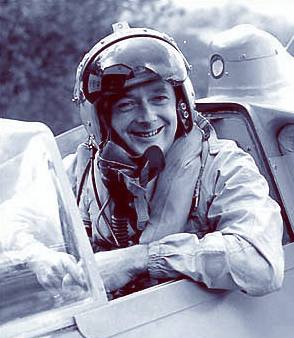 A PARACHUTE, used by speed legend Donald Campbell on one of his record attempts, has sold for more than £800.

The parachute, which was used in a record-breaking land run in 1964, was sold for £850 at an auction house in Buxton in Derbyshire on Tuesday.

Campbell, who was killed on Coniston Water in 1967, is said to have given it to his mother, suggesting she should line the cat’s basket with it.

The parachute was bought by a classic car museum in Minehead, Somerset. Also on Tuesday, a collection of six scrapbooks belonging to Donald’s father and one-time world land and water speed record holder Sir Malcolm Campbell sold for £3,180.

They contain press cuttings, with comments written by Sir Malcolm – three of the books are devoted to his land speed record attempts of 1928, 1929 and 1932, two of which were successful in pushing the record forward.

The proceeds from all the Campbell lots will help to fund a specially converted minibus for a special needs school in Wiltshire.

This website is Copyright © 2014 Bluebird Marine Systems Limited.   The names Bluebird, Blueplanet BE3, Ecostar DC50™, Utopia Tristar™ and the blue bird in flight